Volunteers are vital for the protection of England’s heritage. From caring for rural heritage sites to engaging the next generation of visitors, volunteers’ skills, passion, and commitment are the backbone of the heritage sector.

For over a decade, Ecclesiastical’s Heritage Heroes Awards have celebrated the incredible contribution of volunteers in the heritage sector. More than a simple thank you, these awards are a great opportunity to demonstrate how communities can take ownership of the historic environment around them and make a real difference. 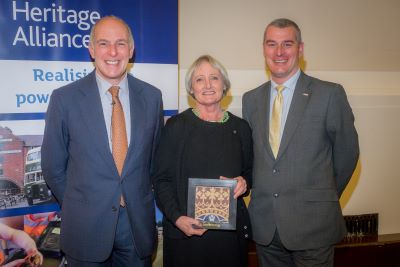 This award recognises Diane’s amazing contribution in transforming an area of wasteland into a sensory garden in the heritage centre of Buxton. From designing the garden and leading clearance parties, to fundraising for the project, Diane’s volunteering and fundraising efforts have made a real impact in her local community. This award is a small token of their gratitude for all her hard work.

Diane said: “I am very proud of what our group has achieved with the creation of a Sensory Garden. A year ago, this was a neglected and litter strewn site in the historic centre of Buxton. Now it is a beautiful and relaxing place where locals and visitors can sit and enjoy themselves; the view from the garden is quite striking. This brings benefits, both physical and mental, and I am very pleased to have made a little difference to the community in this way.”

Stephen said: “Meeting our visitors and working with the staff at St Albans Cathedral has enriched my life in countless ways. Being a Heritage Hero is the icing on the cake. Thank you so much for recognising the work of volunteers – we are often at the heart of so many great heritage sites.”

Peter Ainsworth, Chair at Heritage Alliance added: “A true Heritage Hero is a person who generously gives time and knowledge to creating and preserving beautiful places and objects, often under the radar, for the benefit of everyone. They make a huge contribution to their community by making local places and stories more loved and accessible. Diane and Stephen are a true inspiration, which I hope will encourage others to follow their footsteps.”

This award celebrates the incredible contribution Loyd has made at the Heritage Alliance during the past nine years. In his role as chair, he tirelessly championed the needs of Heritage Alliance members and spent time influencing decision makers in Whitehall and Westminster, and with the business community.

This award recognises Maggie’s amazing volunteering and fundraising efforts for All Saint’s Church Alton Priors, Wiltshire and the Churches Conservation Trust. From organising classical music concerts for more than two decades, which have raised tens of thousands of pounds, to rallying the community to raise money to protect the church roof when half of the lead was stolen. The award celebrates the many hours Maggie has volunteered to make a real impact in her local community and the heritage sector more widely.

You can watch a video of Maggie here on YouTube.

This award celebrates Maria’s incredible contribution to the Heritage Trusts Network and its predecessor organisation the Association of Building Preservation Trusts during the past 29 years. Having retired earlier this year, Maria has helped many heritage organisations from helping volunteers and giving advice about how to set up Trusts, to advising the Prince’s Regeneration Trust, to working with the Scottish Historic Environment Forum. This award is a small thank you for all of her hard work.

You can watch a video of Maria here on YouTube.

Lizzie Glithero-West, Chief Executive at Heritage Alliance added: “The Ecclesiastical Heritage Heroes Awards recognises three amazing individuals for their dedication and hard work which for volunteers, all too often, can go unrecognised. I am especially pleased that we have celebrated Loyd Grossman’s significant and dynamic contribution to the heritage sector. We’re grateful for his passion and time spent advocating our members during the past nine years.”

For 13 years Mike Slinn led the project to rescue a large but derelict medieval Grade II* Dronfield Hall Barn and to give it a viable daily use. Mike overcame serious planning obstacles and raised over £1m of funding through an entirely voluntary team. The project involved the whole community and today it is used as a base by the town’s main heritage, arts and natural history bodies.

You can watch a video of Mike here on YouTube.

David received this award for his work at English Heritage’s [Alliance member] Lincoln Medieval Bishop’s Palace. A key feature of the Palace was its vineyard. Previously tended to by the city council, it became neglected and at risk of total loss. A team of 10 volunteers had dwindled to one. That one not only continued but taught himself pruning and other key skills and today both the vineyard – a unique feature – and the volunteer team are restored to health. Wine is expected to be produced next year.

This award recognises Kate’s leadership of the Heritage Alliance. Kate was already a stalwart of the heritage scene when she came to us, having previously worked for, among others, the Victorian Society, ICOMOS UK and SAVE Britain’s Heritage. Kate’s 13 years at the Alliance has seen the transformation of the fledgling Heritage Link into the thriving organisation that we see today. Kate’s OBE in the previous year’s New Year’s Honours list was a thoroughly well-deserved recognition of a career devoted to heritage in all its forms.

Lord Ashton of Hyde, DCMS Lords Minister, said: ““These awards highlight the important contribution made by volunteers up and down the country in preserving England’s heritage. Heritage Day is also a wonderful way to celebrate this sector and the invaluable work they do to protect our nation’s history for future generations”.”

Recognising that the lug-rigged fishing vessels that once filled West Cornwall’s harbours were in danger of total extinction, John identified one of the few survivors in a state of dereliction. Thanks to his determination and hard work restoring the 44ft carvel-built vessel, the Ripple was returned to the water in 2007. The Ripple is now the oldest fishing vessel under the British flag. The restoration was carried out with objectives to safeguard the boat’s future viability and benefit the community, making the project a clear winner for this year’s Heritage Heroes Award.

You can watch a video of John here on YouTube.

The Chairman of The Heritage Alliance, Loyd Grossman, commented: “The Ripple is an outstanding example of Cornwall’s fishing heritage and makes the restoration project a clear winner for this year’s Heritage Heroes Award. Without any public support, John has succeeded in preserving one of the last sailing luggers, and his achievement shows how our heritage is not only about the boat itself but also about how the community can benefit. Putting both together makes him an outstanding recipient for this year’s Heritage Heroes Award.”

The Save Preston Bus Station Campaign worked to save from demolition the now Grade II listed central bus station in the city of Preston in Lancashire, England, which was built by Ove Arup and Partners in Brutalist architectural style to a design by Building Design Partnership. Preston Bus station opened in 1969, as the grand transport interchange in the only partly-realised civic plan for the new town Central Lancashire.

You can watch a video of their videos here on YouTube.

Howsham Mill is a Gothic style watermill built in the 18th century as a folly on the river Derwent, near York. It had been allowed to become derelict, but the building has been restored through the work of the Renewable Heritage Trust, with the work completed in 2013.

The mill wheel is now used to generate electricity and, augmented by an Archimedes screw turbine, is capable of earning £35,000 a year in sales of electricity to run the project. This has all been achieved by a small volunteer trust. The mill now serves as an environmental education centre for school groups and as a meeting place. The trust organises craft courses and outdoor events allowing the public to benefit from this wonderful building in a beautiful location.

You can watch a video about the Mill here on YouTube.

Portland Works, built in 1877, a Grade II* listed building, became the first place in the world to manufacture stainless steel cutlery. In 2009, the future for the Works looked like conversion into small flats, which would have ended 130 years of manufacturing. A volunteer led campaign eventually blocked the planning application and set up a Community Benefit Society to buy, manage and conserve Portland Works. The volunteers wrote a business plan and spent 18 months raising over £250,000 through community shares – with the breadth of support demonstrated by over 500 shareholders. They completed the purchase in 2013. The Chairman and prime mover is retired school teacher Derek Morton who was presented with a glass plaque by Loyd Grossman.

The Bluebell Railway opened its extended track, from Sheffield Park to East Grinstead, on 23 March 2013. The £3.5million project took nearly four years to complete. The viaduct required restoration and 100,000 tonnes of domestic waste had to be removed from a 400-yard cutting in order to re-lay the railway. All work apart from the heavy waste removal was undertaken by volunteers – as well as the fundraising. The Infrastructure Director of Bluebell Railway plc, Chris White, received a certificate from Loyd Grossman.

Co-founder and Chairman of the Monastery of St Francis and Gorton Trust, Paul Griffiths was commended for his tireless work on the ‘Return of the Saints’ project – a 16-year struggle to return twelve statues of Franciscan saints to their rightful places in Gorton Monastery’s nave.

Norman Tulip, Chief Engineer of the SS Shieldhall in Southampton, was recognised for his efforts in making the ship seaworthy again after wear and tear threatened to take it out of operation.

Inayat Omarji volunteered his time to help develop a major project to regenerate the Grade II* listed All Souls Church in Crompton, Bolton, into a sustainable community asset for the benefit of local people. The All Souls Community Centre Trust, of which Inayat is Chairman, successfully bid to the Heritage Lottery Fund to enable this much-loved local landmark to house a ‘pod’ creating a modern, multi-functional community centre. The new All Souls will play host to library facilities, an adult education programme, support services for job seekers, community business services, after-school clubs, arts and cultural activities, support services for the elderly, and health classes.

Joint winners of the Award are the volunteers of the Ffestiniog & Welsh Highland Railways, whose quarter of a century long project to restore the steam-hauled Welsh Highland Railway has resulted in a world-class heritage and tourist attraction, which is making a major economic contribution to the local community of Gwynedd. Between 1997 and 2011 over one thousand local volunteers have contributed their time, expertise and money towards gradually reconstructing and reopening the line. Skilled professionals have contributed their time pro bono – from legal advice, to civil engineering expertise; volunteers have turned out every weekend for four years, come rain come shine, to lay the final 20km of track from Rhyd Ddu to Porthmadog; and volunteers support the paid staff in all aspects of operating the train service throughout the year.

Alliance Chairman Loyd Grossman commented “I’m thrilled to present the Heritage Alliance Hero Award to two such inspiring winners. Ffestiniog & Welsh Highland Railways and All Souls Bolton are two outstanding examples of the power of our heritage to deliver important benefits to local communities. They paint a picture of the many thousands of enterprising volunteer-led heritage initiatives underway up and down the country, ensuring our past continues to make a valuable contribution to our future.”